You know, I said that 75 times going around the moon.
Every time the Earth came over the horizon, I said activation control.

I said it in 20 different languages because we’re trying to make a point that then. That.
We’re all humans on this planet that we call Earth.
And uh space planets. Something for a…
I grew up on a small farm in Michigan.
And I truly believe I lived the American dream.
How do you go from being a farmer on a 10 acre farm in Michigan, to be going to the moon?
Pretty incredible, I think.
Takes a lot of persistence. Takes a lot of dedication. And It takes a lot of training.
And the training only begins when you get down to Houston.
I’m going to go off a little bit here.
I’m not going to talk in a sort of traditional way about, about thrust and weight and that kind of stuff.
I’m going to read you some stuff that I wrote many years ago. 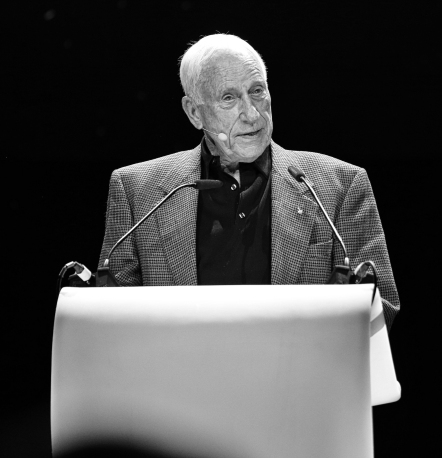 We went through all that training for our flight.
Three years of specific training just for a flight.
And that’s on top of all the training that we did all of us before we got into the space program again so…
training was so important.
But then the morning comes for launch.
You get all dressed up and you go through the things you’ve got to do and you get it and then you go out to the launch pad and you get ready to launch.
Houston is like

and it’s kind of what you go through its nerves.

Once we get into orbit, on my flight, we went around the world one-and-a-half times.
At 90 miles, which is a little low for a long term space flight.
So we had to do all our checks quickly. And get ready to go to the moon.
One-and-a -half revolutions over Hawai. We fired up our engine again.
And we went to the moon.
Took us three and a half days to get there.
And we went into a 60 mile orbit around the moon.
And here’s kind of what it’s like; two hundred and forty thousand miles away from home.

So we spent six days. At the moon.
And I came around the Moon worse for sixty one hundred and fifty rubles. Seventy five revolutions.
Basically, by myself.
And every time we came around I saw the Earth, and you see the planet.
And it’s so special. It´s where we live.
We don’t see any other place where we can live. But the Earth is where we live…

This is thanks of a very very good friend of mine: Farouk El-Baz
Who, as an Egyptian, was my geology instructor.
And a wonderful person.

He is the one who translated all the Earth´s greetings from Endeavour into 20 languages for me to say.

Think about that a little bit.

From there and I must admit I probably take a lot of time.
But we got to it one.
What´s space-flight all about? It´s hard to describe.
I did my best. And you know what… I love about poetry?
I have a musical background.
I was going to be a musician before I was, kind of, pushed into going through the military academy because of family finances. 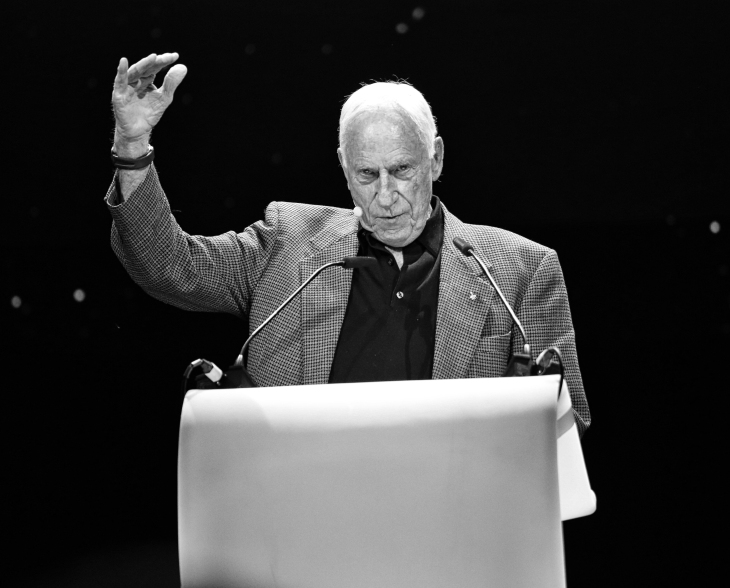 So, I had to give up my musical career.
But I think that impacted me a little bit.
I don’t play anything anymore.
I think music is the bedrock for everything.
And I think poetry is kind of in there along with the music.
So what is spaceflight all about?
Let me try and draw a picture for you:

So, with that I’m going to put one more which I wouldn’t sure I want to do but
we always try to depict the kind of people that would go to the moon and come back.
And this was an attempt to kind of explain.

Thank you very much.»